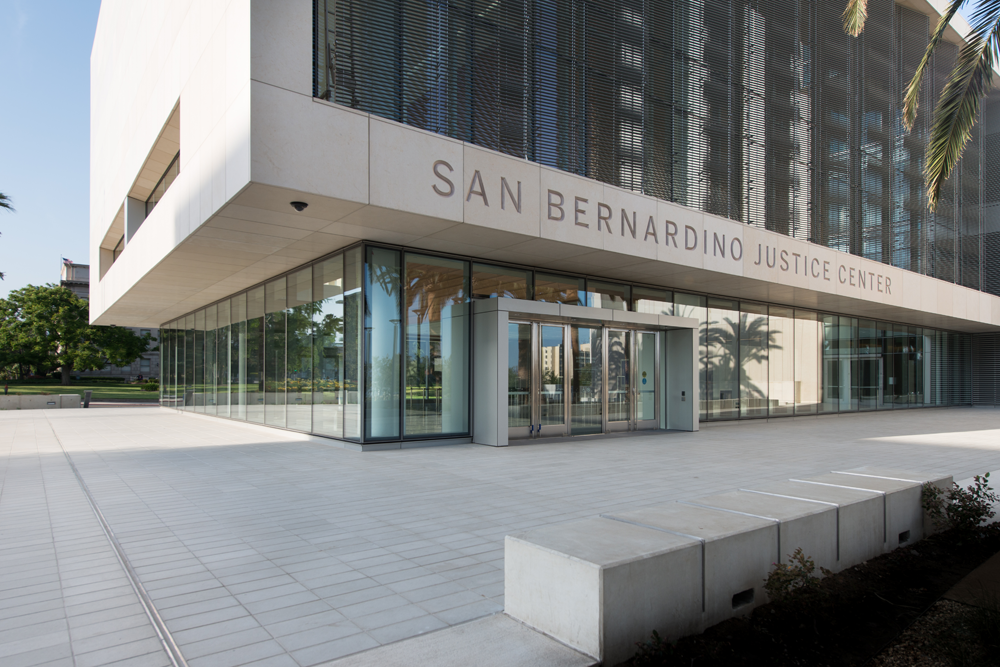 The first in California with integrated AV and IT 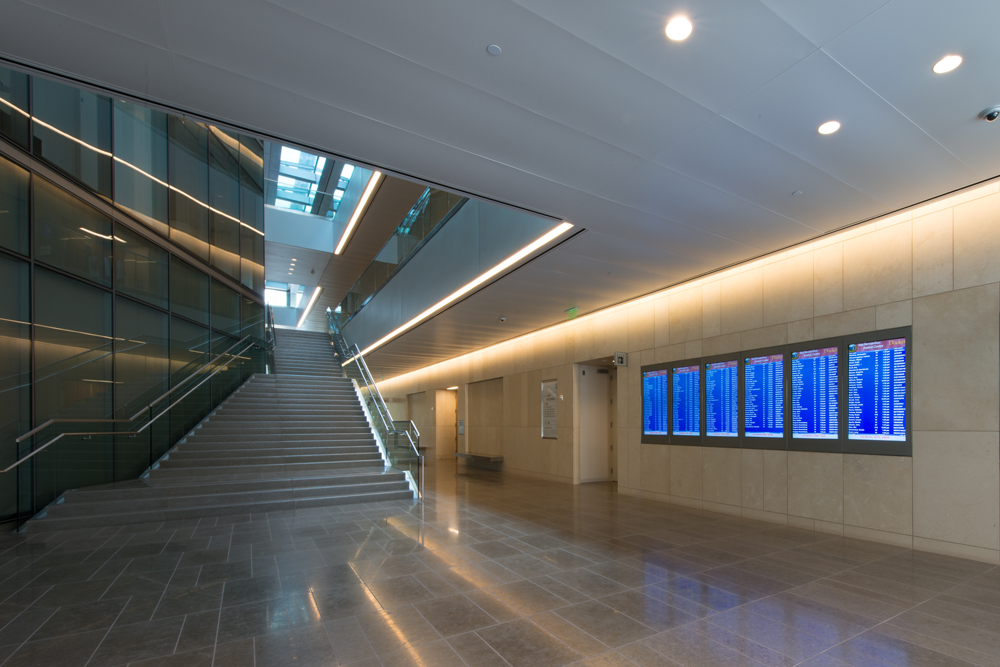 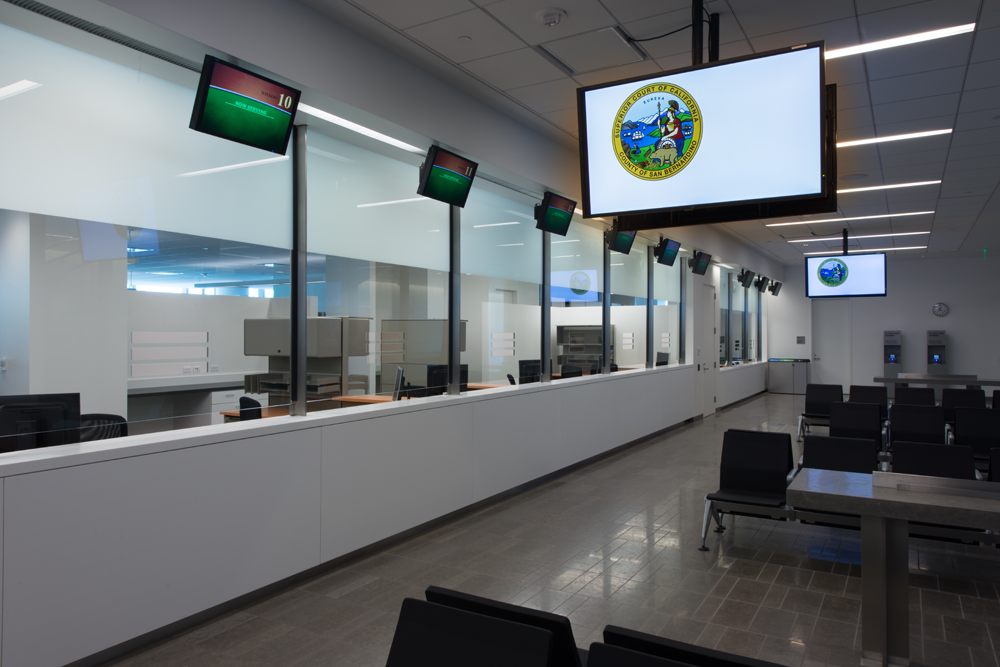 Build a technologically integrated courthouse for today and the future.

Adopt AV and IT standards to network all systems together in a user-friendly environment that ensures due process.

Imagine gaining the consensus of judges, court administrators, facility planners, operations technicians, architects, engineers and building code officials to standardize every aspect of a 58-county court system that serves nearly 34 million people. Now imagine reaching agreement on AV and IT standards for the courts in a time of rapid technological change. That was the task before the California courts over roughly a decade. In May 2014, all the efforts bore fruit, with the opening of the Superior Court of California for San Bernardino County.

Jennifer Willard, CTS, spent years guiding the technology standards that would make the 11-story, 35-courtroom San Bernardino County Court the first courthouse in California to have an integrated AV and IT infrastructure. Willard, the former Supervising AV/Video Systems Technical Analyst for the California Courts, says that facilities standards adopted by the court system in 2011 were critical to delivering the systems that will redefine the courthouse experience throughout the state, starting in San Bernardino.

“We wanted one network in these buildings and everything — no matter what it is — will ride on the network,” Willard says. “There is no independent AV network, no independent lighting control network; it’s all on the same network.”

Among others, Willard had collaborated with Stephen Shea, CTS and Associate Principal of Shen Milsom & Wilke (SMW), a San Francisco-based consulting and technology design firm, to develop the California Trial Court Facilities Standards. SMW served as the AV, telecommunications infrastructure, IT network and acoustics consultants for the San Bernardino Court project.

“The systems have to work…because you can’t shut down courts,” says Shea. “We needed to find proven technology that would meet the day-one requirements, meet future requirements, while being be rock-solid and give them the ability to upgrade down the line.”

S. Pearl Freeman, AIA, Manager of Design and Construction of the Capital Program for the Judicial Council of California, was project manager for the San Bernardino courthouse and brought an architect’s perspective to the AV/IT infrastructure.

“We look to our architectural and engineering team to suggest innovation that addresses current and future needs identified by the court for buildings that will last 50-plus years,” Freeman says. “You really have to take a look at the technical savvy of the courts themselves. As you make decisions about technology, you want to make sure that the user is able to make use of the technology and has the capability to manage it.”

User-Friendly Automation
Today, the benefits of integrated AV and IT technology touch every user group at the San Bernardino Superior Court, including in-house staff and security, judges, bailiffs and court clerks, witnesses, plaintiffs and defendants, counsel and jury, as well as citizens who use the courthouse for something as simple as paying a parking ticket.

“For a judge to be able to press a button to make the projector to come down, to change lighting scenes for different presentations, and to be able to control the microphones makes everything so much more efficient and user-friendly,” Freeman says.

There’s a learning curve, but Freeman says that judges and clerks accustomed to working an old way have embraced new technology. “I went on a tour with a judge and he was marveling at the Creston touchpanel and how easy and convenient it was to use in operating his courtroom,” she says.

“One of the more integral parts of the design was working with all of parties to make sure not only that the automation system was usable, but also that the graphic user interface (GUI) on the touchpanel was aesthetically pleasing,” says SMW’s Shea.

Phoenix-based ExhibitOne handled the AV and control systems integration and worked on the GUI design.

“We run through a very strict, three-step process for the touchpanels,” says Frank Vass, Manager of Engineering at ExhibitOne. He says first, designers develop a narrative to describe what the system will do. Once the narrative is approved, the team provides screenshots of the proposed GUI, including descriptions of what every button will do the interface will look like when a button is touched. “When we give them the screenshots of the GUI, they want to see, from just looking the pages, if it is intuitive,” Vass says.

The final step: “Bring in people from local court staff, judges and anybody who has anything to do with the operation and show them a simulated panel,” Vass explains.

Today, a court clerk has access to a touchpanel, which controls all aspects of the courtroom, from audio muting, to dialing the audio teleconferencing system, to selecting which inputs get routed to the projector. The control panel is IP-based so it can be moved to any port in the courtroom.

“The judge has his or her own button panel that provides an overall system mute so they can mute all the microphones in the courtroom,” says Shea. In addition, judges can mute video, in case someone shows something inappropriate. “And a judge can enable a ‘sidebar setting,’” explains Shea. “When lawyers approach the bench, pink noise is generated over the well area to help mask the conversation from the jury and the public.”

Space Considerations
Over the course of the project, the team created a full-scale, working mockup of a courtroom to ensure every detail was considered, tested and refined, and that standards were met.

“One of the bigger challenges in courtrooms is the acoustical isolation between real spaces,” says Shea.

“You have very different levels of noise from different areas,” says Tracie Ferguson, SMW’s acoustical engineer. That includes corridors, judges’ and clerks’ offices, jury rooms, holding cells and public. Depending on the space, the team chose appropriate surfaces and acoustical barriers not only to isolate sound from other areas, but also to ensure voice intelligibility where necessary. “The ceilings are all acoustical material,” Ferguson says. “And so are the walls surrounding the public seating area so people don’t disturb the proceedings at the front of the courtroom.”

“Knowing that we can maintain the NC rating within the courtroom, we are able to use a distributed audio system with 70-volt ceiling speakers that are not intrusive,” says Shea. SMW worked with the architect so that the speakers could be hidden within the architectural details. “You don’t see a speaker grill,” Shea says. “It’s just located above the acoustical ceiling and there’s acoustically transparent material to allow the audio to go through.”

The courtroom mockup proved an asset throughout the process.

“In January 2013, the Americans With Disabilities Act changed,” Willard says. “Now you have to have a minimum 26-inch reach to the microphone on a table. We literally had to cut the tables.”

Standards Drive Tech Design
In developing the AV/IT standards for the California courts, including in San Bernardino, it was important to ensure that legacy devices could be supported.

“For the foreseeable future we have to support both analog and digital,” says Willard. “If counsel brings in a cassette player, a VCR player or any other analog device to play evidence, we have to be able to support those devices.” Noting that there may not always be technical person available to troubleshoot, Willard says, “The equipment, the signal and the cable need to be able to automatically understand what type of signal is being pushed and respond.”

In addition, Shea says, “Little things we take for granted,” can be significant. For example, the California courts standards stipulate that all microphones have illuminated rings at the top so it is clear when a microphone is active or muted. “Counsel tables have the ability to mute their microphone, but the judge needs to know when it has been muted and be able to override that,” he explains.

Willard says the experience in a courthouse should communicate dignity. With this in mind, careful consideration was taken in choosing AV devices that would be visible to the public, in particular flat-screen displays.

Digital signage makes it easy to navigate the courthouse. “The large calendar displays at the entrance and the smaller displays outside each courtroom assist in getting everyone to the correct courtroom,” says Alan Crouse, Deputy Court Executive Officer, Technology and Facilities, for the San Bernardino Superior Court. “But the people who come to our counters may have seen the biggest improvement. Instead of standing in line, waiting for the next clerk, customers now take a ticket from the dispenser and sit comfortably, usually enjoying free WiFi, until their number is called by the automated queuing system.”

Crouse credits the AV/IT design with helping make the best use of a limited IT staff. Crestron’s RoomView asset-management tool enables monitoring of all of the equipment and immediately sends a notification if a problem occurs.

“What the 2011 California Trial Court Facilities Standards really tried to create was a backbone and an infrastructure that would be open to improving technology,” says Shea. Simplicity was key, he says, “So we wouldn’t have to do a forklift upgrade for the building.”

From an integration perspective, ExhibitOne’s Vass says, “All of the Crestron DigitalMedia switching equipment and endpoints made our lives much easier because you’re getting full transported video, control and audio over one cable.”

With security systems, IT, telecommunications, building management, lighting and automation control and AV all on a converged network, not only can all of the systems talk to each other, they can also be updated easily and yield other efficiencies within the building design.

The California Courts’ 2011 technology standards have propelled the systems AV/IT infrastructure the future, but with room to evolve. “If there is anything I have learned about design and construction, it’s that you have to be nimble,” says Willard. “You have to observe, respond and work very closely with all of your partners.”

The San Bernardino Superior Court includes audiovisual systems from many different manufacturers, including but not limited to: